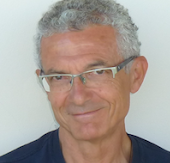 Research and teaching experience in industry and academia for over 25 years:

Author or editor of six books and author of over 100 scientific journal and conference papers in the above research areas.

Talks on policies and Univesity of Patras issues

Policies and Technologies for Life Long Learning at the Univesity of Patras, 45th EUCEN Conference, Charmey, May 2013 (slides)

The Univesity of Patras as a development factor for the Region of Western Greece, Regional Development Conference, Patras, June 2013 (slides in Greek)

Learning in the city through pervasive gaming, keynote at Re-PLAYce:theCITY, Zurich, Novermber 2013, slides

The road to open courseware: The UPatras Experience, Invited talk in a panel for Open Courseware in Hellenic Conference on ICT in Education,Volos, September 2012 (in Greek) slides

Introduction in Human-Computer Interaction and applications, February 2012 (in Greek) Video of talk (40 min)

The role of digital media in interaction with objects and places of culture, Elefthero Panepistimio, 15th Cycle of Lectures, Stoa Vivliou, Athens, October 2011,

Design of interactive technologies for a mobile and ubiquitous world, 13th 3IA International Conference on Computer Graphics and Artificial Intelligence, Athens, May 2010.

Class of tomorrow: mobility and interactivity in new ecologies of learning, One Laptopo Per Child Event, ACTI Patras, Greece, June 2007 (presentation in Greek)

Data and Knowledge Based Systems